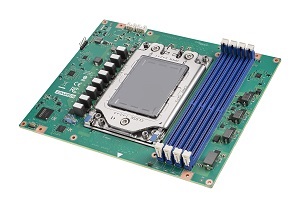 Typical applications of the new COM-HPC benchmark module can be found in industrial-grade network technology such as VPN gateways and firewalls with high data throughput requirements of up to 100 GbE and fast buffer storage, telecommunication, and critical edge infrastructures such as 5G base stations, complex mixed-critical industry 4.0 edge servers, or even radar and sonar applications deployed in the security and defense sector.

The benefit of the Server-on-Modules approach in these applications lies in the fact that it is faster and more cost efficient to develop a dedicated server design. As a result, industrial-grade server equipment providers are able to design fully customised solution platforms even for lower volume projects as typically found in industrial applications.

“The launch of the new COM-HPC Size E Server-on-Modules with the powerful AMD EPYC 7003 Embedded processor series enables us to move quickly into the emerging market of modular edge servers, which is very important. Remember that standard server designs are engineered for high-volume sales and offered with largely uniform feature sets. Bringing server-class processing performance to the embedded and edge server space produces customisation needs; and Server-on-Modules address these needs with the processor module and carrier board design principle that is proven and that has been widely deployed for several decades,” explains Dirk Finstel, associate vice president embedded IoT & CTO Europe at Advantech.

“For many years, we have seen the need for customisation in the embedded computing area. The high efficiency of combining modules with custom carrier board designs is the major reason for the massive success of Computer-on-Modules. COMs are the most used board-level products in the embedded computing space. With the COM-HPC Server-on-Module specification, this design principle is now also available for a broad range of entry-class server processors up to the recent AMD EPYC Embedded 7003 processors,” says PICMG president Jess Isquith to underline the importance of the new Server-on-Module specification which Advantech, as a member of the PICMG COM-HPC subcommittee, has been integral in defining.

“It is impressive how quickly Advantech has taken the opportunity to provide our server processors on Server-on-Modules that comply with the new COM-HPC server standard. It shows us that the embedded edge and embedded network server market is gaining significant momentum and that the digitalisation of Industry 4.0 factories and critical infrastructures creates a huge need for customised system designs. With massive generic PCIe Gen 4 lanes, our EPYC 7003 CPUs are ideally designed for tailoring servers to dedicated tasks,” says Amey Deosthali, director of product management, adaptive & embedded computing group at AMD.

Besides the embedded computing power of up to 64 cores and multiple generic PCIe Gen 4 lanes, Advantech’s new SOM-E780 Server-on-Module also boasts the high energy efficiency engineers can have for x86 servers, delivering exceptional performance, reducing energy costs and enabling even passively cooled solutions. Another benefit is the single socket approach, which helps to minimise licensing costs compared to any dual-socket server design.

Built on AMD ‘Zen 3’ microarchitecture-based cores and the AMD Infinity Architecture, AMD EPYC 7003 Series processors provide a full feature set across the stack, with I/O lane counts, 7nm x86 CPU technology, and an integrated security processor on die. They also offer up to 32 MB of L3 cache, 4-6-8 memory channel interleaving to optimise performance in multiple DIMM configurations, and synchronised clocks between fabric and memory technologies that come together to drive leadership performance.

The feature set in detail