According to data presented by Atlas VPN, the average financial damages caused by a data breach increased by nearly 10% year over year to $4.24 million (€3.57 million)in 2021. This is the highest spike since 2015.

A data breach can have a number of negative implications for a business, including lost sales, a tarnished reputation, data recovery fees, and possibly employee layoffs.

Edward Garb, a cybersecurity researcher at Atlas VPN, comments on the recent findings, “The record-high average losses can be directly linked to the rapid onset of remote work, as it created many new loopholes for cybercriminals to exploit.”

The numbers are provided by IBM, where between May 2020 and March 2021, researchers conducted roughly 3,500 separate interviews with individuals from 17 countries and 537 firms that had experienced a data leak. Seven years ago, the average total cost of a data breach stood at $3.79 million (€3.19 million). The lowest losses were seen in 2017, where companies suffered about $3.62 million (€3.05 million) in damages per incident. 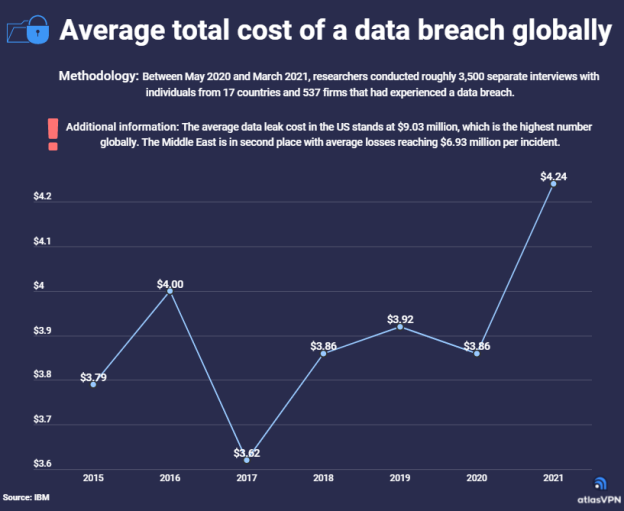 Moreover, the average data leak cost in the US stands at $9.03 million (€7.60 million), which is the highest number globally. The Middle East is in second place, with average losses reaching $6.93 million (€5.83 million) per incident.

Interestingly, financial damages vary widely depending on the industry of the enterprise that fell victim to the data leak. Incidents in the healthcare industry are the costliest, as losses averaged a staggering $9.23 million (€7.77 million) this year. Healthcare companies tend to store a lot of sensitive data about their customers which can explain the high costs per breach.