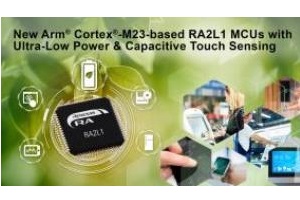 The RA2L1 MCUs are designed for ultra-low power consumption, with several integrated features to lower BOM costs, including capacitive touch sensing, embedded flash memory densities up to 256 KB, SRAM at 32 KB, analog, communications, and timing peripherals, and safety and security functions. In many battery-powered applications, the MCU spends most of the time in a low-power standby mode waiting for an internal or external event to wake-up the CPU and process data, make decisions and communicate with other system components. When benchmarked for power consumption, the RA2L1 MCU was certified with an EEMBC ULPMark score of 304 at 1.8V, verifying its best-in-class power rating. Users can now minimise power consumption close to the standby levels to extend battery life.

“Continuing the rollout of the RA MCU Family, I am pleased to announce the expansion of the general-purpose RA2 Series for HMI IoT applications,” said Roger Wendelken, senior vice president of Renesas’ IoT and Infrastructure Business Unit. “The RA2L1 MCUs were designed from the ground-up to optimise for lowest-standby power, employing an advanced power and clock gating feature, and integrate our second-generation capacitive touch sensing unit with advanced and highly differentiated features.”

The advanced capacitive touch IP in the RA2L1 MCUs provides enhanced operability for a variety of touch and touchless system implementations. For example, it supports sensing through acrylic or glass panels more than 10 mm thick, which is enough for use in household equipment with thick doors or partitions. It also implements proximity sensing (hovering) and 3D gestures. This accommodates hygiene or safety limitations. The RA2L1’s capacitive touch noise tolerance meets the requirements of IEC EN61000-4-3 level 4 (radiated) and EN61000-4-6 level 3 (conducted) to assure reliable operation with minimal sensing errors.

The RA2L1 MCUs with Flexible Software Package (FSP) allows customers to re-use their legacy code and combine it with software from partners across the vast Arm ecosystem to speed implementation of complex connectivity and security functions. The FSP includes FreeRTOS and middleware, offering a premium device-to-cloud option for developers. These out-of-box options can be easily replaced and expanded with any other RTOS or middleware.

The FSP also includes a best-in-class HAL driver, as part of the FSP, and provides a host of efficiency enhancing tools for developing projects targeting the RA2L1 MCUs. The e2 studio Integrated Development Environment provides a familiar development cockpit from which the key steps of project creation, module selection and configuration, code development, code generation, and debugging are all managed. The FSP uses a GUI to simplify the process and dramatically accelerate the development process, while also making it easy for customers to transition from an original 8/16-bit MCU design.