How is the internet faring during Covid-19? 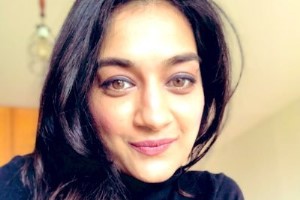 Now, more than ever, the internet has become a critical lifeline for billions of people and businesses impacted by Covid-19 around the world. Usage has soared as employees log on from home, students continue learning, streaming increases as people keep themselves entertained during national lockdowns, and even religious services, fitness classes and medical appointments all go digital.

In the UK, says Archana Kesavan, director of product marketing, ThousandEyes, Vodafone reported an increase in traffic of 50%, and Verizon has seen web usage on its network up over 20%.

So, how is the internet holding up under the weight of this unprecedented level of usage?

Though overall it has held up well, both outage spikes and temporary lows have occurred during these past few weeks as compared to pre-coronavirus levels. ThousandEyes monitors internet health by aggregating network data from thousands of vantage points, taking billions of measurements each day to detect instances of traffic termination within internet service providers (ISPs) and the networks of public cloud providers, unified communications-as-a-service (UCaaS) providers, and edge service providers (CDNs, DNS, and SECaas).

Throughout March, overall, global network outages rose and reached previously unseen levels. While these numbers fell in early April, they have returned to near March levels since then. In this article, we’ll take a deeper look into how each of the internet-related networks and services have fared during Covid-19-related traffic increases, and the potential reasons for disruption.

The majority of all outages occurred among ISPs

Naturally, during this period of increased Internet usage, ISPs have reported a rise in requests for bandwidth and connectivity from customers and peers. A vast majority of all outages between January and April were ISP related. We’ve seen a steady rise in the number of global ISP-related outages since the beginning of March, with a brief decrease in early April. ISP-related events reached peak around the end of March, hitting more than 250 instances during the week of March 23rd, with nearly half (120) occurring in the US. In comparison, UK ISPs have coped better with no more than 20 ISP outages per week. 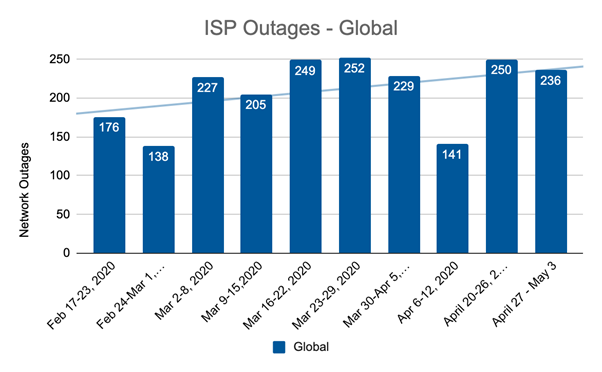 Whilst many may think that this increase is down to heavy congestion on ISPs’ networks, the characteristics of these outages aren’t necessarily consistent with infrastructure being overwhelmed. In fact, the duration and scope of many of the outages that did take place suggest that they were probably the result of traffic engineering and network optimisations in the back-end to address the shifts in traffic trends.

Major public cloud providers such as AWS, Azure and Google Cloud, on the other hand, have proved to be well equipped to handle traffic surges. Global cloud provider outages have stayed below 30 instances each week, which isn’t a great deal more than seen during pre Covid-19 times. However, as with the ISP outages, we did see a slight peak in events during mid to late March, and then again in late April.

Most recently, global outages have dropped again and in general, these numbers are still relatively normal. The resilience among cloud providers isn’t surprising, perhaps, when you consider the amount of investment they have put into their infrastructure over the years to cope with growing use. 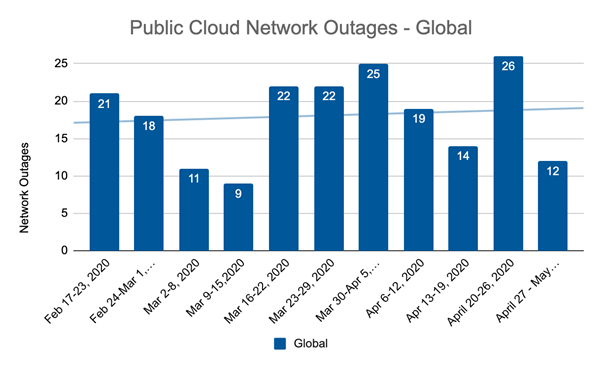 UCaaS outages spiked the most compared to pre Covid-19

We have, however, seen a clear spike in outages among collaboration app network providers, which includes video conferencing services. UCaaS outages pre Covid-19 were rare and the surge is perhaps unsurprising when you consider how dramatically user and usage levels have risen as people of all kinds turn to these applications to work, learn and keep in contact with friends and family during national lockdowns.

Globally, there was a huge spike in outages in late March/early April which subsided a bit the second week of April, and then spiked again. In the UK, however, UCaaS outages have remained low. The last couple of weeks in April, ThousandEyes reported zero outages in the UK among collaboration app network providers. 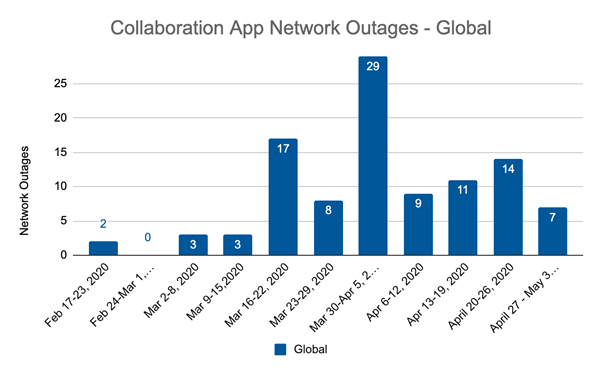 The need for internet visibility

The recent number of outages may represent our ‘new normal,’ although, it may be too early to tell. What is clear, however, is that the overnight transition to a remote workforce and customer base has created a situation where enterprises are now completely reliant on a well-functioning internet. Now more than ever, IT teams need better visibility into how their networks and services are performing to ensure critical business applications and services are available and performing for customers and employees.

This includes getting a correlated view of performance across their own digital ecosystem – all applications, networks and the internet itself. Monitoring user SaaS and internally-hosted app experience and correlating it to underlying network connectivity, including Wi-Fi, ISPs, and virtual private network (VPN) gateways will enable IT teams to isolate and triage performance issues.

Outages are inevitable, even under ‘normal’ internet conditions, and there are multiple reasons an application or service can experience an outage. Even issues unrelated to network usage such as fibre cuts can bring an unwelcome spotlight. While outages do not follow a predictable trend there has been a notable increase in traffic across the internet and to core business, media and social platforms in the last few months, due to changes in working, and living, patterns. To ensure that employees and customers enjoy uninterrupted digital experiences, a sound network strategy will continue to be the best method to manage outage occurrences.

The author is Archana Kesavan, director of Product Marketing, ThousandEyes.