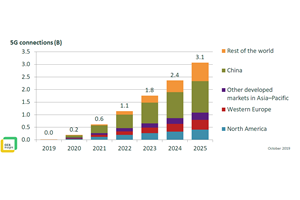 Consumers in the US and UK have high awareness of 5G technology, and many take a strong interest, but services need to be better positioned and the benefits more clearly explained if 5G is to take off rapidly.

This is one of the leading findings of CCS Insight‘s survey into consumers’ perceptions of 5G and their purchase intentions. The survey results were released alongside an upbeat long-term global 5G forecast from CCS Insight that predicts global 5G connections reaching 1 billion in 2022, 2 billion in 2024 and 3 billion in 2025.

Strong interest and awareness from consumers

More than half of people surveyed expect 5G to play an important role in their next choice of mobile phone and about one in three plans to start using 5G on a mobile phone in the next 12 months. This is good news for network operators and smartphone manufacturers struggling to generate enthusiasm in a declining device market.

In the UK, more than 90% of respondents said they had heard of 5G, an encouraging finding that suggests marketing campaigns to accompany early network launches have worked well. Awareness was lower in the US, despite 5G services arriving more than six months earlier than in the UK.

Kester Mann, director of Consumer and Connectivity at CCS Insight, says that the results reflect the impressive recent progress made in Europe. “Who would have thought a year ago that Birkenhead and Bolton would get 5G services ahead of San Jose or Cupertino?” he remarks. “Europe is upping its game in 5G and narrowing the gap with the leading markets.”

The survey revealed some initial barriers to adoption of 5G services. Notably, in the UK nearly a third of respondents believed they “don’t need 5G”, with seven in ten saying they prefer to wait until a mobile technology like 5G is proven before getting it. Tie-in to existing long-term phone contracts, and an unwillingness to pay more to receive 5G were the other leading hurdles.

But Mann says these challenges are far from insurmountable. “There’s a real opportunity for operators, handset makers and other players to gain market share in 5G by offering more-innovative service plans and to better communicate 5G’s benefits,” he says. “And over the next year 5G-capable smartphones will appear at much more attractive prices than the current highs of $1,200 (€1,081).”

CCS Insight’s survey also found better-than-expected interest in using a 5G service for home broadband. The results will be welcomed by Three in the UK and T-Mobile in the US, which are seeking to disrupt the home broadband market with 5G services. Respondents listed price, performance and quick installation as the leading factors that might encourage them to sign up to 5G home broadband.

But creating an association between mobile-centric brands and home broadband services could be a challenge. In the UK, more people told us they would consider taking 5G for home broadband from providers with an existing presence in this market, notably BT and Sky.

One new opportunity could come from multiplayer gaming. More than one in ten respondents said that a dedicated, high-quality service for gaming could prompt them to sign up for 5G. Mann comments “With 5G, high throughput, low latencies and freedom from cords and cables could change the way people game and create a new use for 5G in the consumer market.”

China to push 5G connections above 3 billion in 2025

With commercial 5G services now launched in more than 20 markets, all eyes are on China, where 5G is set to go live in the coming days. According to CCS Insight’s latest 5G forecast, published today, China will become the world’s leading market for 5G early in 2020. Buoyed by swift roll-outs and a burning national ambition, uptake of 5G is set to be record-breaking, resulting in a huge 1.2 billion 5G connections in 2025, or more than 40% of the global total.

“Chinese operators’ desire for a fast debut in 5G is good news for everyone. Smartphone makers and their component suppliers are racing to create products at competitive prices to benefit from a market where we expect about 100 million 5G-capable phones to be sold in 2020 alone” explains Marina Koytcheva, vice president of forecasting at CCS Insight.

“These new, lower-priced 5G devices will be welcomed by operators in other markets, as they will help them attract customers to their 5G networks, and might prompt demand for phones to bounce back a little in Western markets.”

Europe is also set to make an important contribution to global 5G growth. Although often maligned for trailing other regions in 5G, Europe already counts an impressive 17 live commercial networks in markets including Spain, the UK, Switzerland, Germany, Italy, Romania and Latvia. As in other regions, network expansion, lower device prices and attractive service plans will be leading drivers of adoption. CCS Insight forecasts that connections will total more than half a billion by 2025.

The survey research was completed in August 2019. CCS Insight surveyed more than 2,000 mobile phone users in the UK and the US. The sample was nationally representative of the population by age, gender and region. The survey focussed on awareness of 5G, understanding of the principal benefits, propensity to purchase and barriers to adoption.